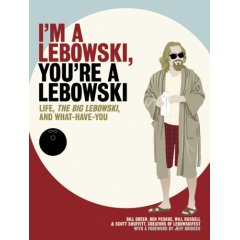 We caught up with Scott Shuffit, a co-founding Dude of Lebowski Fest, a festival celebrating the movie by the Coen Brothers, The Big Lebowski, in Louisville, Kentucky last week. Scott was full of wise advice about pursuing multiple interests and why you need to do what you love.

After high school Scott attended trade school for graphic design, and began designing T-shirts. While working a full time job and running his store The Mothership Connection, Scott’s came up with the idea of a Lebowski Fest with a friend at a tattoo convention. The first Fest, held in Louisville, attracted a crowd of fellow Lebowski-lovers who came to bowl, drink White Russians, and be merry. Nine years later, there have been Lebowski Fests in cities all over the U.S. and international locations. Scott also co-authored the book  I’m a Lebowski, You’re a Lebowski: Life, The Big Lebowski, and What Have You

Scott’s other interests, art and filmmaking, have also grown in the past years. Scott is currently working on a documentary called Save Indie, about independent record stores and their place in local culture. The catayst for the film was when Louisville’s local indie music store, Ear X-Tacy, announced that it was on the verge of closure after 25 years.

Scott’s advice to people who want to chase their dream?  Just do it.  Just do it. Just like Nike said. — Scott Shuffitt