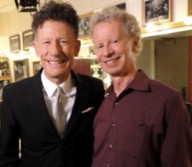 We were incredibly lucky to interview the show’s executive producer, Terry Lickona, during the very last taping at the historic Studio 6A. In 2011, Austin City Limits is moving to a new home at the Moody Theater, a state of the art music venue in downtown Austin.

When we arrived at the studio, it was a media frenzy. Incredibly, Terry found time for us in-between interviews with local television stations, NPR, and a host of others. It was a once in a lifetime experience to be able to talk to a living music legend on such an important day.

Make sure to check out our incredible interview with Terry:

Special thanks to Terry for believing in our project and to Jonathan Jackson, who generously provided the excellent footage of the last taping at studio 6A.