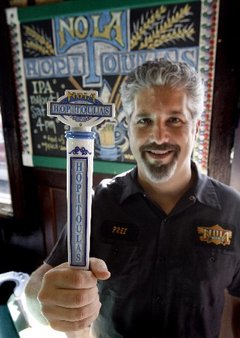 NOLA Brewing is the dream of entrepreneur, Kirk Coco. After serving in the United States Navy for 11 years, Kirk returned to his home town of New Orleans to help rebuild the city and its economy after the devastating effects of Hurricane Katrina.

New Orleans was once the brewing capital of the south. However, in recent years and particularly after Katrina, many New Orleans-based industries have relocated.  Kirk was determined to change that by bringing brewing and commerce back into the city. With the help of former Dixie brewmaster, Peter Caddoo, Kirk started NOLA Brewing.

Creating a brewery was a learning journey for Kirk and his team. They had to overcome numerous challenges – creating their signature beers, finding investors, purchasing a building, assembling complicated brewing equipment, and bringing the beers to market. Now in its second year, NOLA Beers are becoming so popular that the brewery is having to purchase extra keg barrels just to keep up. They currently offer six beers including:  blonde and brown ales, an Irish stout, a wheat beer, and a spring seasonal called Hurricane Saison.

Meeting Kirk was a real pleasure. He absolutely radiates fun and happiness.  He offered some of the most insightful advice we’ve heard about following your dreams. Make sure to watch the interview below: